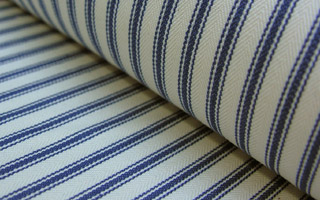 Ticking fabric was traditionally a very densely woven cotton herringbone or twill weave cloth used for making mattress & pillow cases. The derivation of the word ‘Ticking’, material used to cover pillows and mattresses, is from the Greek theke, “receptacle”. Ticking cloth was traditionally woven with even narrow stripes in the warp, usually in navy or black & cream, however many variations of stripe pattern & colour have evolved. 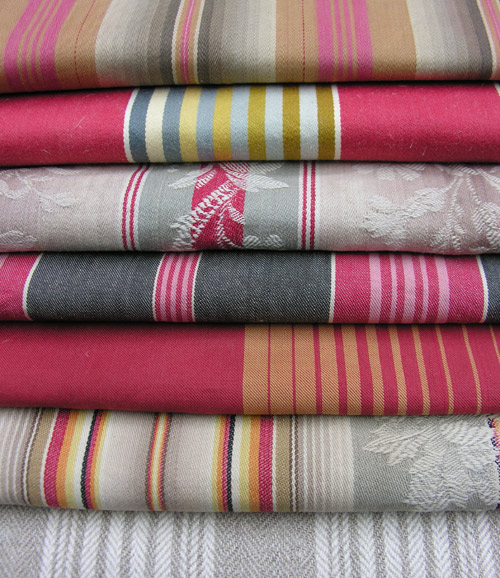 Modern ticking fabric is generally not feather proof as it is woven and finished for qualities of drape and wear for curtains or upholstery. Traditional ticking fabric was also made feather proof by waxing or soaping on the back. Tickings have been a mainstay of the Tinsmiths’ fabric collection since we opened in 2004, and we now stock an excellent range of excellent quality ticking from mills in the UK & EU. We only stock traditional woven ticking cloth with a herringbone or twill weave, & over the years have used it for many successful projects as curtains, blinds & upholstery. For curtain use our tickings have an excellent drape & for upholstery use we have found our ticking to be extremely durable with some of the cotton ticking that we stock achieving a rub test of 35,000 cycles. 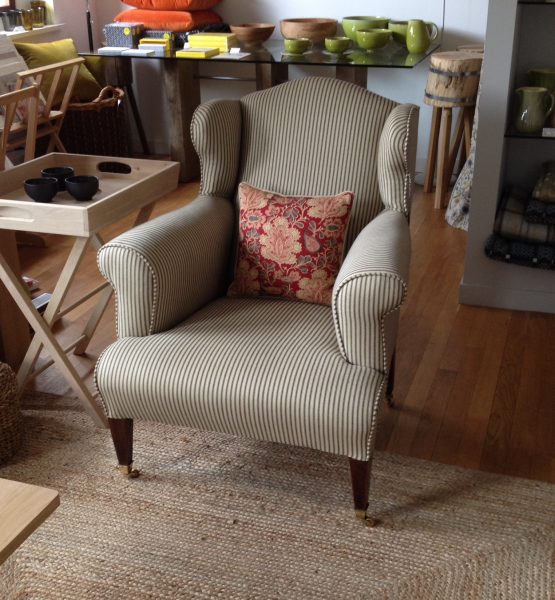 Old Armchair re-upholstered in Anthracite, note how well ticking works as piping to give a lovely finished edge.

Ticking fabric is an excellent choice for those wanting a scheme that will not date; neither cutting edge contemporary or fussy or twee, ticking is a straightforward classic cloth which will look good for decades. 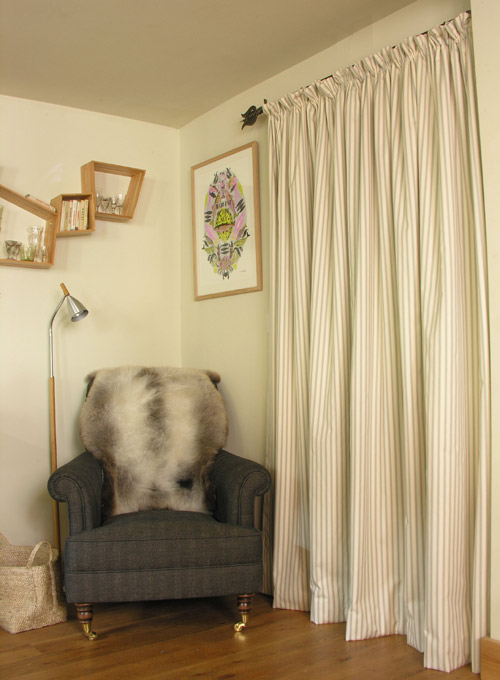 Tickings from a huge range on the shelves at Tinsmiths: 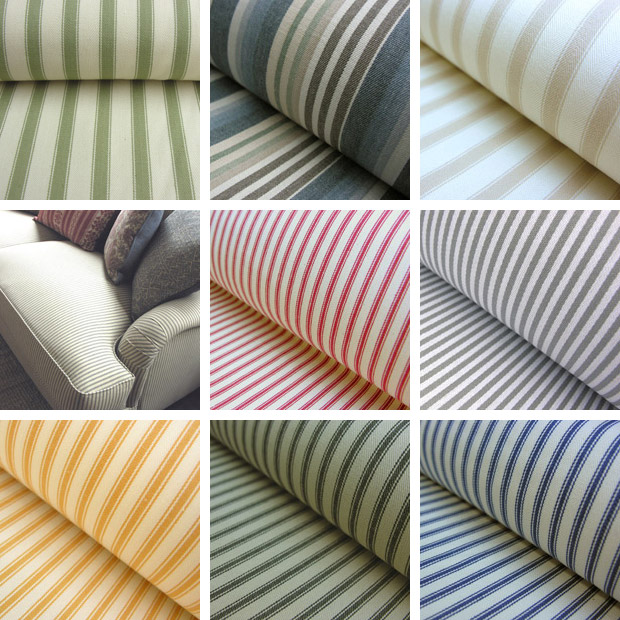 by claredelatorre | 5 Apr, 2013 | Out & about in Herefordshire & beyond, Uncategorized

The maquette for John Piper’s baptistery window for Coventry Cathedral in the V and A’s ‘British Design 1948-2012’ exhibition last year inspired a visit to see the real thing.

After the 14th Century cathedral was bombed in World War 2, Basil Spence was selected as the architect for a new Cathedral following a competition. The ‘new’ cathedral, begun in 1956 completed in 1962, sits next to the ruins of the old; the ruins are also clearly framed by the ‘Great West Window’, the ‘Screen of Saints & Angles’ by John Hutton.

The building was constructed in the same sandstone as the ruined building and its exterior seems massive and impressive in the way that such a building should be, however it is the interior which for me was a complete revelation. The nave space is immense with seven pairs of elegant pillars drawing the eye vertically, but the real genius is the way in which the decorative elements are completely integral to the whole. The John Piper window is fantastic, but equally beautiful are the narrow stained glass windows which line the nave by Lawrence Lee. The choir stalls designed by Spence himself sit comfortably in their environment and every element that you look at seems to have been so carefully considered and beautifully realised – the ‘Coventry Cathedral Chairs’ by Dick Russell (Gordon Russell), the wonderful Hans Copper candle sticks, the High Altar Cross designed by Geoffrey Clarke………I can heartily recommend a visit, for anyone with even a passing interest in 20th century design it will both inspire and inform.

“The best of all merchandise coming to Samarkand was from China: especially silks, satins, musk, rubies, diamonds, pearls, and rhubarb…”  reported  the embassy official Ruy Gonzáles de Clavijo, 1403-05 from his post in Timur. Rhubarb progressed steadily from the East to the banks of the Volga (where is got its name) and across Europe.

In 2010 the UK growers of the rhubarb triangle (now bounded by Wakefield, Morley and Rothwell, Yorks) claimed a victory in their application to have forced rhubarb included on the list of European Commission’s Protected Food Names along with Champagne and Parma Ham.

Forced rhubarb spends two years growing, without being harvested, in an open field to build up strength and reserves in the crowns which are transferred to grow their third year (or few months, in reality) in sheds and are harvested between from Christmas until February. The stems are totally pink, very tender, long and etiolated. Their strength spent, the crowns are consigned to the compost heap.

Full of promise, my rhubarb crowns have been slowly unfurling throughout February –  they have survived March’s snow-covering and yesterday were ready for the first “pull”.  I have never ventured into forcing my barb, but really make the most of the main crop – which seems to last from April through to July or early August. I’m not much of a gardener but so long as I give these crowns a good dose of fresh compost each autumn they seem to thrive;  this year I think it will be time to split the crowns which have quadrupled in three years.

Rhubarb Timperley Early with large chains to prevent hens scratching at the crowns as they emerge.

Here is a recipe for Rhubarb Custard Cake, courtesy of Helen Creese from Salvation Cafe, originally from an “Australian Womans Weekly Baking Book” which I have tried out on my family over Easter, thanks, Helen – they loved it.

On the tiles – parish map

by claredelatorre | 11 Mar, 2013 | Out & about in Herefordshire & beyond, Uncategorized

As an adjunct to “Beer” and “Tile Art” posts, if you are visiting Wye Valley Brewery to purchase any of their ales, turn 180 degrees and take a look at the gable end of Stoke Lacy Village Hall. The Village Artmark scheme, funded by Herefordshire Council in 2005 selected local maker, Mark de la Torre (also showing tiles at Tinsmiths during our Tile Art show), to make a piece of art for the Village. He worked with local people to create a Tile Map approx. 8mtrs high by 4mtrs across which maps the contours, field names and features of the parish with photographs and sketches from villagers fired in to the ceramic surface.

Our Tile exhibition opens in a couple of weeks, so I’ve been thinking a lot about the use of tiles, the ways that they are produced and used. Last month’s visit to Jackfield Tile Museum at Ironbridge really helped. The museum is housed in the original offices of Craven Dunnill est. 1872 with the adjacent factory open to the public on specified days.

Press technology developed in the nineteenth century remains the industry standard; the  presses (now hydraulic) ram clay powder into plaster moulds to produce flat or textured tiles. Despite the use of hydraulic presses, the production line is still very labour intensive – perhaps not in comparison to our “potter’s tiles” in the exhibition – but in terms of modern factory production, this is very “hands on”.

The museum area is fascinating – my favorite room being the light, bright Design Room which now houses a snap-shot of art history through tiles 1840 to 1960 and the most fabulously tiled employees “loos”. As most people know the heyday for decorative tiles in this country was undoubtedly the Victorian era; a time when anything that could be decorated, would be.

At the Tile Museum I was particularly struck by a reconstruction of a Victorian bar – where tiles were made that formed an arc both horizontally and vertically and had decorative textured surfaces – just think of the engineering involved and the confidence that sales would justify the set-up costs. Perhaps this is easier to imagine when one realises that this small area of Jackfield (home to the largest encaustic tile factory in the world in the 1870s, Maws & Co.) produced more tiles than anywhere else, the factories even had their own railway lines and exported worldwide.

But what of contemporary tile use today? With architectural projects spending millions on polished concrete for the outside of their buildings, is their anyone considering extensive use of tiles as an alternative? Well, a quick google search reveals lots of ceramic cladding, a few plain glazed flat tiles covering large areas but oh,  for the colour, pattern and texture that there could be……architects, designers awake….. if anyone has some invigorating examples of architectural tiles, please send them in to us. In the meantime do come and see Tile Art at Tinsmiths from 16th March and on-line at www.tinsmiths.co.uk from 23rd.