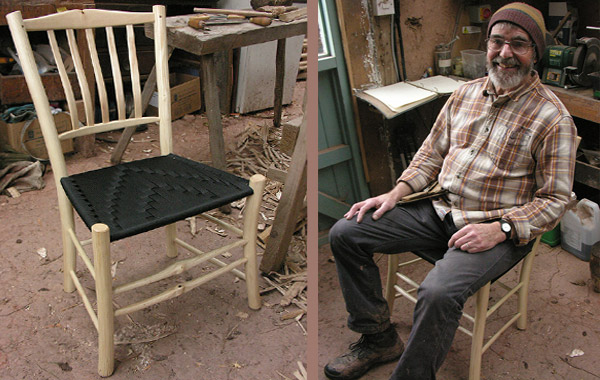 “I tried retiring in September 2015 – that lasted about six weeks” laughs Mike who has spent a lot of his working life teaching hundreds of people via his courses and thousands via his books about how to make chairs using greenwood.

Jointly founding The Clissett Wood Trust in 1994, Mike worked and taught in the wood, which is close to Ledbury; there he predominantly used a pole lathe to make traditional chairs, in much the same way that Philip Clissett (1817-1913) had in his workshop at Stanley Hill, near Bosbury. Later he established a woodland workshop at Brook House Wood, near Bromyard and continued to run courses in the wood from 2005-2015. 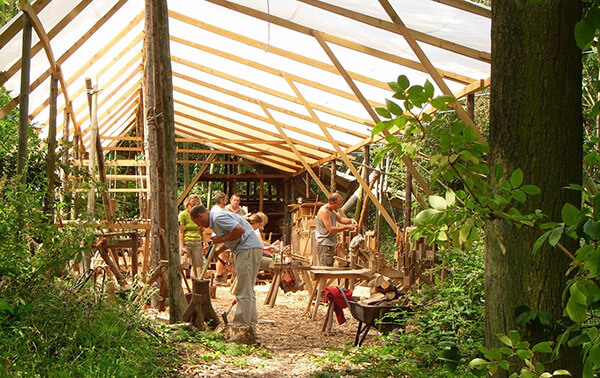 Above: The woodland workshop at Brook House Wood

“Nowadays it’s all about this – the cleave” explains Mike as he splits oak in his workshop to shape on the shaving horse  – a traditional device used for gripping a piece of wood, leaving both hands free to use a drawknife to shave the wood. Later, he shows me cleaving on a large scale with a large section of oak.

Mike was first inspired by the bodgers who worked in the woods of the Chilterns, turning in vast numbers, the components for Windsor chairs. “These days my influences lie further West, in America and in particular with Walden,” Mike explains. In his twenties, he came across a book entitled ‘Walden or Life in the Woods’. The author, Henry David Thoreau, a 19th Century American philosopher undertook a two year experiment to live simply in a self-built cabin in the woods. This encouraged Mike to accept an invitation to visit the USA in 1993, where he was influenced by the chair-makers of the Appalachians, who left their chairs with a simple shaved finish, rather than the more sophisticated, smooth turned finish.

Above: Cleaving and Shaping Oak with a Draw Knife held in a Shaving Horse 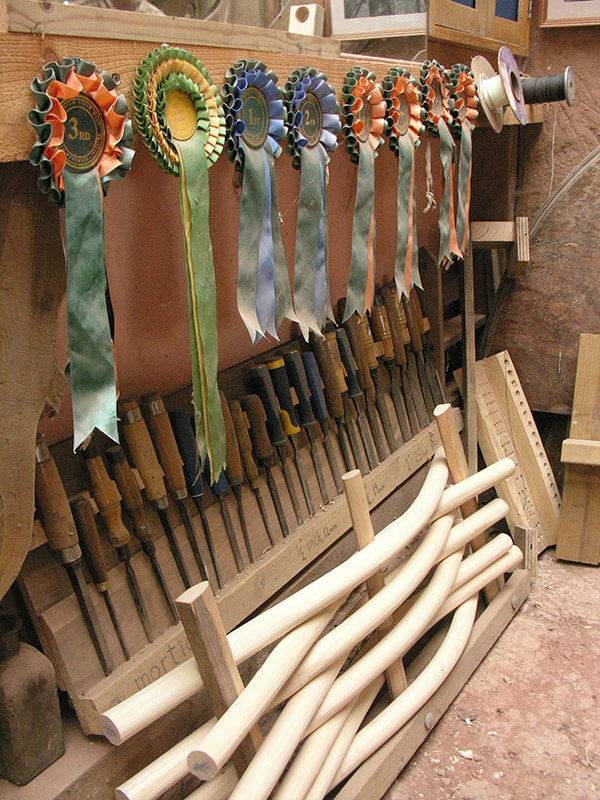 On the rebound from retirement, Mike has set himself a challenge. To make and document 100 chairs – a sort of limited edition, each one branded with its number. He’s already on number 21 so he may have to come up with another goal.

With enthusiasm, Mike shows me his latest passion the “Settin Chair” a low frame chair with woven seat and steam-bent uprights forming the back rest. I don’t immediately “get it”. I need a demonstration.

We step up the garden to his latest timber-built space, and puts down the chair in its “Out West” natural environment, the veranda. He leans back (in just the way that youngsters in formal dining rooms have been warned against for generations) in a casual, end of day, way. That’s Settin.

Mike will be part of our chair exhibition, Working from the Wood at Tinsmiths 30th June to 30th July 2017 – celebrating the legacy of Philip Clissett in his bi-centenary year. Fellow exhibitors are Neil Taylor, Lawrence Neal, Gudrun Leitz (see earlier blog post) and Sebastian Cox. For an invitation to the show please e-mail your name and postal address to [email protected]