by claredelatorre | 12 Dec, 2011 | Designers & Makers, Out & about in Herefordshire & beyond, Tinsmiths Exhibitions & Events | 0 comments

Artist and printmaker, Ed Kluz visited Ledbury a couple of days ago in preparation for his part in our next Printmaking exhibition in the Spring (St. Judes at Tinsmiths, April 2012). Ed is very interested in art history and architecture. He is an active member of SPAB – The Society for Protection of Ancient Buildings whose stated purpose is to be  involved in all aspects of the survival of buildings which are old and interesting. The body’s principal concern is the nature of their “restoration” or “repair”, because misguided work can be extremely destructive. During his stay in Ledbury, Ed was fascinated to see the footprint and remnants of Stoke Park at Stoke Edith, a grand 17th century house, lost in a devastating fire in 1920’s. 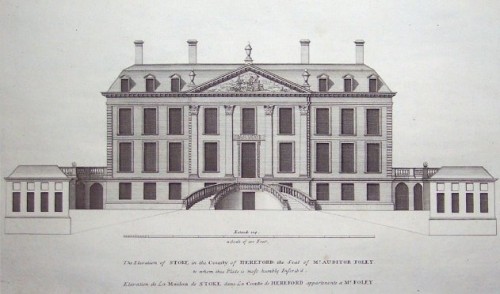 Stoke Park is just one of many grand houses lost during the depression following the first world war. For many, an accident such as a fire, meant they were extremely unlikely to be rebuilt. What often remains is a fascinating landscape of the “big house” – parkland, stable blocks, remnants of the building itself.  Now and again, as with the textiles which once decorated the walls of Stoke Park, something of the interior of these houses are held in national collections, giving us a chance to imagine the past complete.

Ed takes the romance of these losses into his work, many of his compositions include elements from these landscapes, architectural features left behind. We are hoping that something of his visit will inspire the work we hang next Easter. 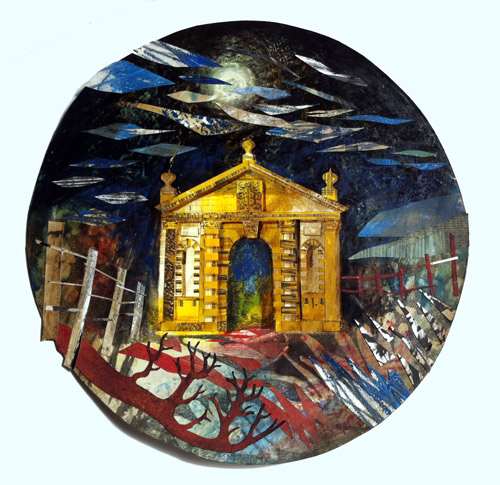 Above: The Mausoleum at Mellerstain House, Scotland by Ed Kluz.