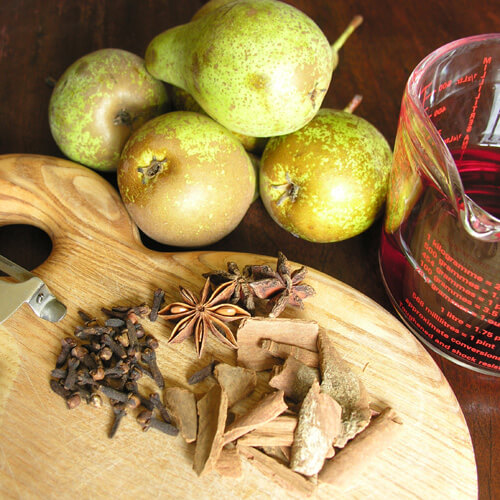 It looks like being a bumper year for orchard fruits. My conference pears could hang for a few more days before picking but the sight of them spurred me on yesterday to cook a favorite pear recipe, so simple and yet really stunning visually and to one’s taste buds.

I’m not going to be terribly exact (as in previous efforts) with this recipe because it really depends on lots of variables – like the size of your saucepan, in particular. Just make sure that you have: 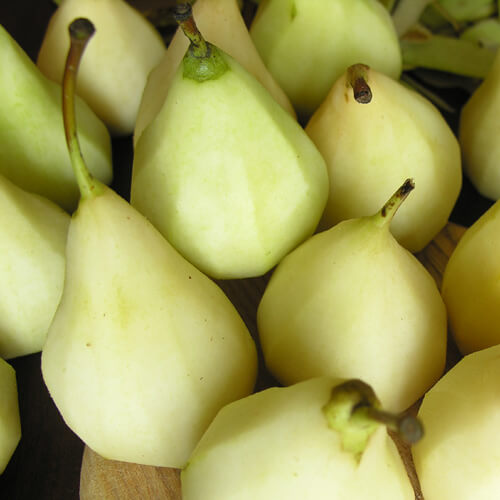 Peel the pears leaving the stalks on and cut a flat base for them to stand upright in the pan. Using a potato peeler longitudinally gives very attractive “facets” to the surface – if, like me you can get a little intense about such matters! Add them to the pan – check that there is nothing under each pear (like a clove) and make a tight pack for best chance of keeping pears upright. The wine mixture should come half to two thirds up the pears. I would start with half a pint of apple juice and half a pint of wine. If this isn’t enough, just add a little more of each once the pears are standing in place. 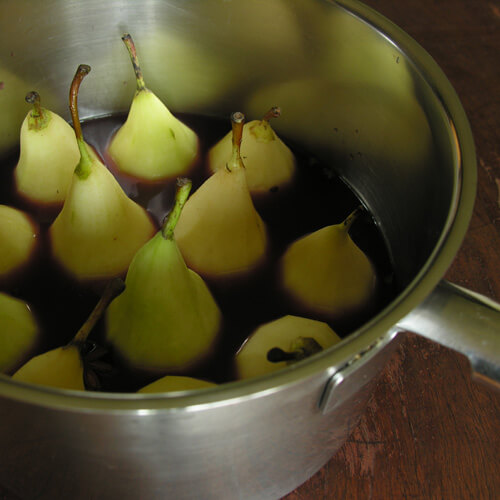 Simmer gently (rapid boil will overturn at least some fruit and spoil the effect of the colouring) until the pears are tender. Remove  fruit and strain liquid. Continue to reduce the liquor until it is just thick enough to coat fruit – or further to a thick syrup if you prefer. 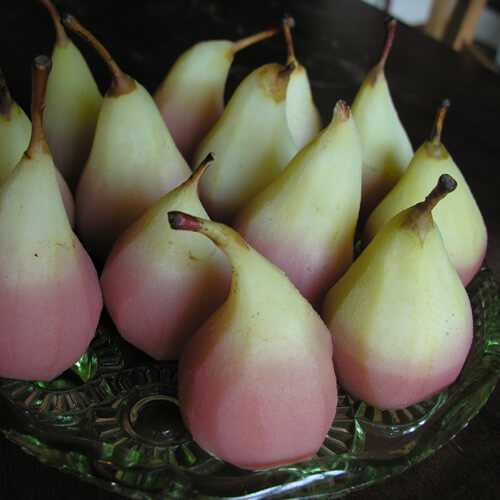 Serve with cream and supply tools – dessert knife, fork and spoon for complete consumption…… I try to make a double batch to have some cold next day.

Now, what would you drink with a meal rounded off with such a dessert? Our friend, James Marston, popped in to say he is just picking his perry pears for the 2014 vintage of Greggs Pit perrys. Some of these will be used to produce his effervescent perry which is bottle using the Normandy method (so a second fermentation in the bottle, as in champagne, completes the process) which is truly delicious.

There will be all sorts of orchard and mill events on farms and small holdings surrounding the Marcle Ridge during the Big Apple harvest celebrations 12/13 October. Look out for James’ open orchard event. There is an opportunity to join in with the Big Apple tour on two wheels, cycling and stopping at regular intervals for tastings on Sunday. A great family event – take a whole day, there is so much to see.