What a pleasant start to my day – a sunny walk around one of the 300 acres of Pixley Berries blackcurrant fields, with views to the Malverns and berries just starting to turn colour.

Herefordshire has a long history of growing blackcurrants, the climate and rolling hills here seem to suit the crop and for many years 95% went to to make Ribena, blackcurrant cordial. At Pixley Berries, Edward Thompson credits Ribena with investing in research and development in the industry that has benefitted all the growers. In the fields surrounding Pixley’s Pressing Plant varieties are chosen for the particular conditions of the growing sites and each field has a grass-planted margin to encourage birdlife – birds that feed on the insects that could infest the bushes. But most importantly, varieties are selected for flavour. Returning to the offices from the field I sampled the pure juices and can say that these cordials give you the sharp aroma of blackcurrant leaves brushed through the hand as well as the sweet-sharp juice of the berries themselves. These cloudy cordials have a really, fresh blackcurrant flavour and fantastic colour too. 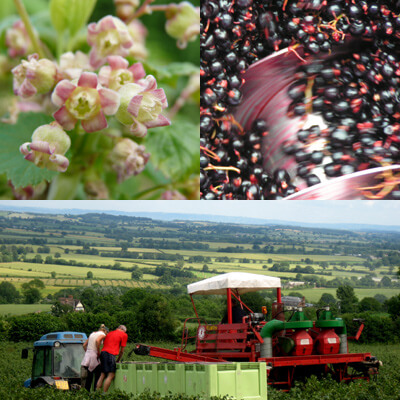 The slopes surrounding Marcle Ridge, near Ledbury are favourable to blackcurrant growing. As with most fruit growing, it is crucial to protect blossom from frost, planting on an incline provides some protection as the cold air moves down the slope as the temperature drops on cold spring nights. Nowadays, frost resistant and later flowering strains have been developed but formerly, and rather counter-intuitively, farmers would spend cold spring nights spraying water on their blackcurrants. The constant spray of water freezing actually stopped the damaging penetration of frost to the flowers – see below! This year, the harvest will probably be at least two weeks late, normally the farm is buzzing with Eastern European harvest workers in July and August, nevertheless the crop looks pretty promising. Herefordshire has always seen its population soar in the summer with harvest workers; until the 1980’s it was customary for families of pickers – grandparents, mums and dads with their children of all ages, from the surrounding cities (Gloucester especially) and travelling families to set up summer camp and work the complete soft fruit harvest. One such operation, Baldwins Fruit Farm – (farmed by Alex Clive’s family, partner at Tinsmiths), kept a pretty good photographic record of farming activities in the 1960’s and 1970’s. Here are some images from their substantial archive. 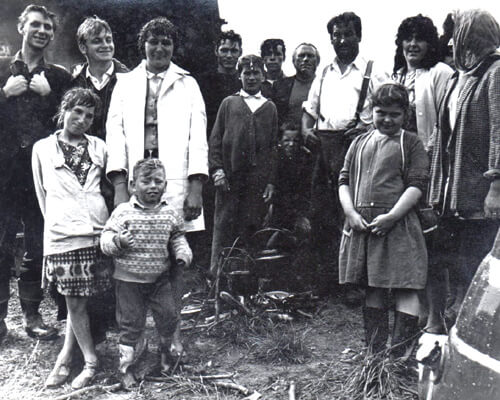 This large family of pickers at the Baldwins Farm (Clive family farm) worked the harvest for many, many years. 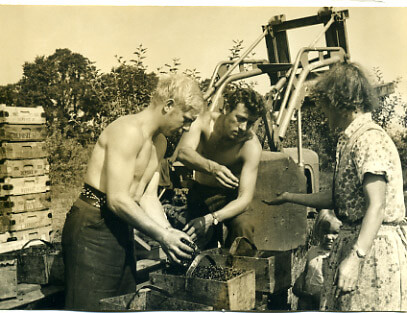 Blackcurrants were sent for pressing in small wooden crates, so that they remained uncrushed on the journey. 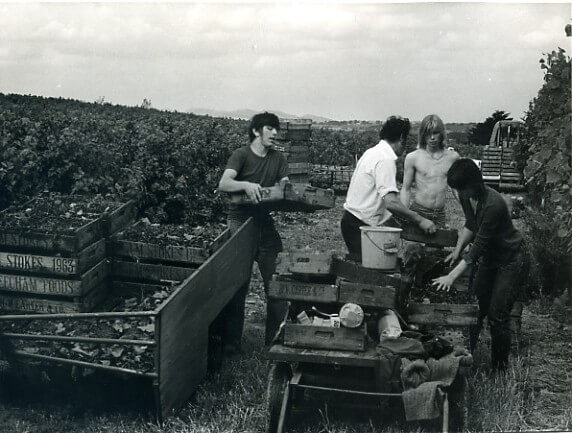 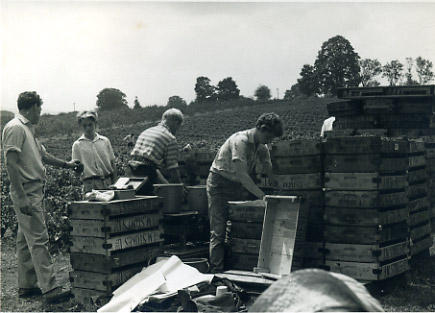 Gang in the fields 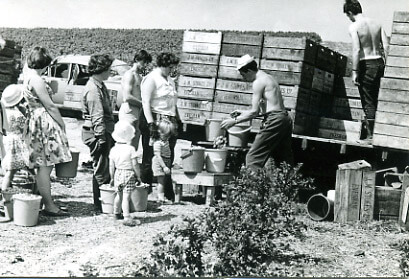 Families deliver their buckets of gooseberries. 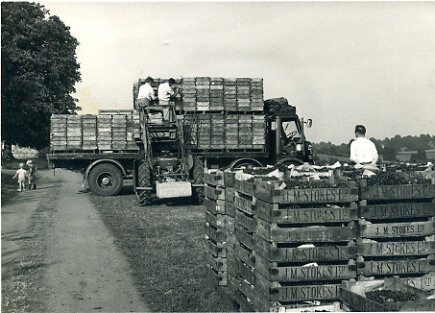 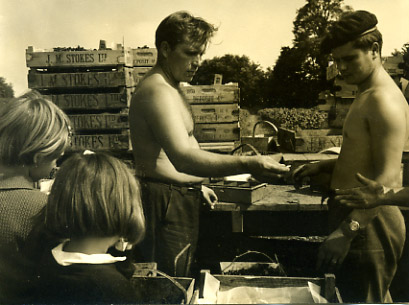 Handing in the Fruits 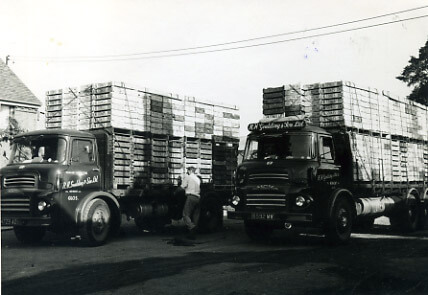 Harvest stacked neatly for transport to Coleford for the
“Ribena” Factory.

Back to current day –

There are growing numbers of farmers choosing to add value, quality and variety by processing their fruits “on the farm” and selling to retailers large and small, their fruit juices, cordials and alcoholic drinks.

Adding to their well-recieved cordials ( Blackcurrant, Blackcurrant and Raspberry, and  Cranberry and Apple) Edward Thompson of Pixley Berries, near Ledbury, has introduced some exciting new combinations of fresh juices – all made from non-concentrated pressings – eg., apple, blackcurrant and rhubarb and some sophisticated, dry, non-alcoholic alternatives to wine like Pixley Rouge, Blanc or Noir. Above: A few of Pixley Berries Cordials and Juice. Below: Edward Thompson, surveying his fields of blackcurrants at Pixley

A couple of my favourite applications of the good old Pixley Blackcurrant cordial are to pour over vanilla ice cream or drop a couple of thimbles-full into the bottom of a champagne flute – Herefordshire Royale. Delicious. If you want a fully alcoholic Herefordshire Kir Royale try Jo Hilditch’s British Cassis, made in Lyonshall, nr Leominster – available at Teme Valley Farmer’s Market.

If you’d like to try Pixley’s bounty get along to Ledbury Poetry Festival on 14th July when they will be part of the Food and Drink Market in Ledbury High Street, just a stone’s throw from the Market House – if you can’t wait until then, visit them at the Cotswold Show 6/7th July, 2013. Or just pop into a Waitrose, Spar or Co-op (Midland region) store.