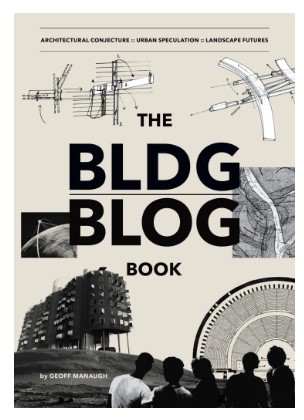 Something new on the shelf this week is Geoff Manaugh’s BLDG BLOG. Geoff  has put into print some of the most outstanding items from the building blog that he began in 2004 http://bldgblog.blogspot.com. The blog or the book is great to dip into – the book’s structure makes it easy just to browse and pick out a different topics or interviews for a few moments or a few hours and this isn’t a straight book about architecture, it negotiates spacial design from lots of angles – as  Geoff says the blog was  “almost literally from day one it was full of archeology,astronomy and underground cities: Gothic cathedrals and Celtic burial mounds; Mars, green roofs and translucent concrete. Somewhere between science fiction and architectural theory, JG Ballard rubs shoulders with HG Wells, WG Seebald and HP Lovercraft;  there were London Floods, Earthquakes and William Blake and James Bond. Ruins, climate change and apocalypse. Cape Canaveral. Hadrian’s Wall. Homer. Anything that could, in however a distant way, be related back to Architecture, in its broadest and most interesting conception“. The BldgBlog  Book is much more like a lively conversation, – so far, and there’s a lot more dipping in to go yet, the interview with games designer Daniel Dociu about the influences in the architecture of his games, the earth trumpets of the Andes and the shipbreakers of Bangladesh and the Mole Man of Hackney have been memorable. A really good book for getting you to see the world differently……..