Tinsmiths’ Calendar Post – What do Potters do all day?

Trying to keep to a format for our Working Lives interviews has been a bit of a struggle. Visiting places of work often means that my mind veers off immediately to ask about a tool or technique, forgetting to stick to the questions I had planned; however I made an attempt this time when I visited potter, Patia Davis at her workshop near Ross on Wye. 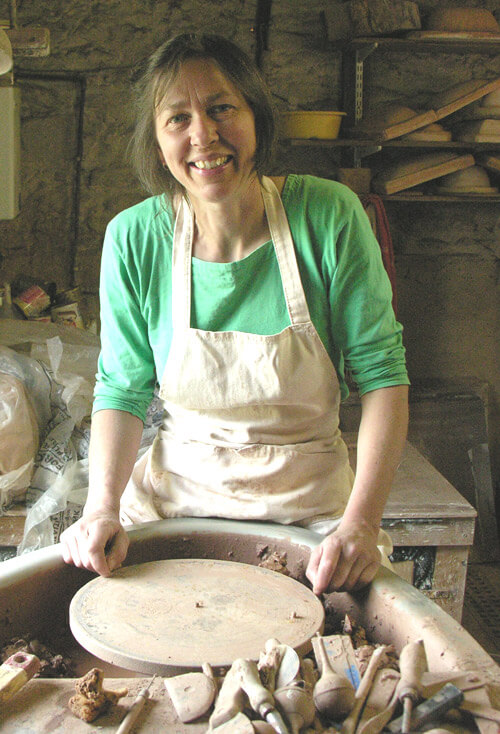 Patia Davis at her kick wheel.

What is Patia’s daily routine? There isn’t one, she said, but the perfect set-up is a 7am walk through her local woods with Ruby, her ever present, quick-witted, whippet/poodle. The apron is usually on by 9am. Every day is different. 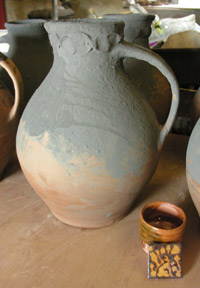 The day I visited she was sieving grit for a project with the National Trust to produce replicas of medieval jugs for Lower Brockhampton, near Bromyard. “I’ve realised that every year is unusual. This commission came out of the blue and has meant interesting research – I’m partly using river grit to make a close match to the type of clay body used  by the potters in medieval times, known as Malvernian ware and galena (now very restricted) to make a lead glaze. When unusual requests come through it stretches my own understanding and  potentially adds to my own pots.

Pottery is a slow process, clay changes its physical properties according to the environment and it’s a part of the potter’s job to control this. Therefore, everyday is different since nothing is done from start to finish in a day. For instance, a kiln firing may take over 18hrs not including the cooling period! It takes a patient and accepting approach.

“When I was eighteen, after “A” levels, spending too much time lying on the sofa watching  Dynasty on tv, and about to fall-off into unemployment, my mum brought me up short. She wasn’t one to stress about things, so when she said “Patia, you’ve got to sort yourself out and decide what you want to do”, I sat up and took notice”. Patia was a self-motivated artist, painting and drawing unprompted throughout childhood. An application for an arts foundation course was made by slipping in through the back door, from there she enjoyed the famous studio pottery course at Harrow, meeting Mo Jupp and Mick Casson who gave their support without stint, afterwards joining the degree course at Cardiff.

Wobage Farm is Patia’s first and only workshop and she has always shared facilities with other makers, including its founders Sheila and Mick Casson. Her work has changed over the 24 years since leaving college and she has become well-known for her “Homage to Slipware” an individual approach to a traditional form of decorating earthenware vessels. 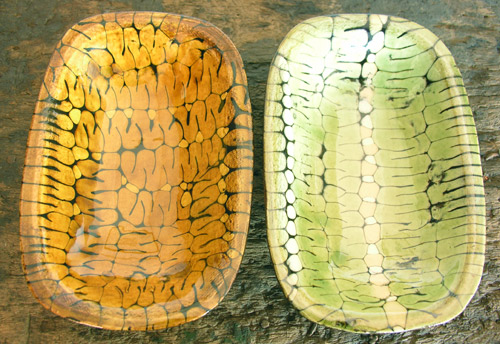 Pottery, historically considered a lowly artform, and certainly part of the everyday, nevertheless has significance. “The mug you have your first cup of tea in enhances your mood – it is my responsibility to put my creative energy into my pots.

That’s what I’m aiming for and is what I appreciate in other people’s work”, explains Patia.

So, what is a potter’s least favorite chore? There is nothing that Patia doesn’t enjoy about making pots, although when I got all excited about witnessing the opening of her latest kiln firing, she was pretty firm that this is a solitary moment.

” I’m pretty useless at promotion and marketing myself. I just find that aspect the least interesting”. Patia  accepts she on is the ‘creative introvert’ side of the spectrum. She began at  Wobage with a shared space, but later realised that a lone space is her ideal,   as creative ideas are ‘flighty’ and thoughts easily interrupted. This is not to say, that sharing ideas and thoughts is not equally vital.

Patia’s ideas are as fluid as the liquid clay (slip) that she uses so breathtakingly to decorate her platters, bowls and buttons.

She throws the more upright designs, like jugs, mugs and deep bowls on a kick wheel but the more shallow forms she makes from sheets of clay slumped and dried over formers.These shapes she relishes for their “canvas” – almost flat surfaces that allow expressive use of poured and trailed slip. 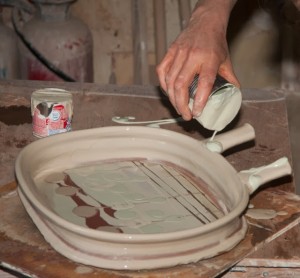 Applying liquid slip to an un-fired “baker” – note use of tin cans.

The day I visited a group of mugs were off to Japan for an exhibition, but most of Patia’s pots are sold at exhibitions, or through galleries in the UK. Patia is also in demand to give talks, demonstrations and short courses. Wobage has an annual programme of  classes run by potter Jeremy Steward, with visiting tutors and taking up to 12 student potters.

We usually have a good selection of Patia’s work in the showroom at Tinsmiths and if you are touring around Herefordshire in September, Patia (and 129 other arts venues) will be open for H.art from 6th September to 14th September – it might be worth getting out a map and working on your itinerary. 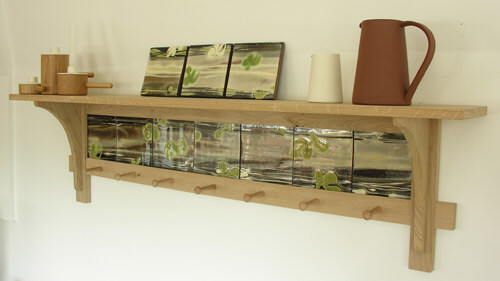