Following last year’s trip to Ukraine, we are bringing some of Ukraine to Ledbury this March with a Pysanky Egg Workshop and Traditional Ukrainian Lunch held at Tinsmiths and run by Nataliya Cummings (Experience Ukraine) and Helena Orlowski. 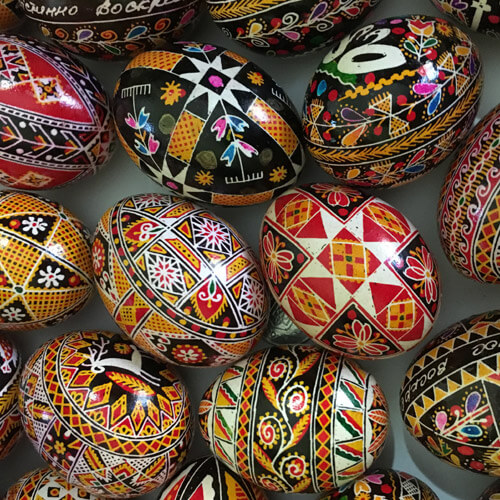 The tradition of decorating eggs using hot wax resist (Batik) techniques dates back to pre-Christian times and The Hutsuls––Ukrainians who live in the Carpathian Mountains of western Ukraine––believe that the fate of the world depends upon the pysanka. As long as the egg decorating custom continues, the world will exist. If, for any reason, this custom is abandoned, evil––in the shape of a horrible serpent who is forever chained to a cliff–– will overrun the world. Each year the serpent sends out his minions to see how many pysanky have been created. If the number is low the serpent’s chains are loosened and he is free to wander the earth causing havoc and destruction. If, on the other hand, the number of pysanky has increased, the chains are tightened and good triumphs over evil for yet another year.

Colours and symbols are specific to a region and family and these are passed from Mother to daughter. The blessed eggs are given to relatives and respected community members as a talisman against bad fortune in the coming year. A good number are placed in specific places around the house and with livestock to ward off evil and secure fertility for the coming season. Young women would present an egg to eligible batchelors in their community – the antidote to online dating! 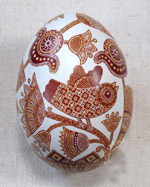 One example of many, Birds, were considered the harbingers of spring, thus they were a commonplace pysanka motif. Birds of all kinds are the messengers of the sun and heaven. Birds are always shown perched, at rest, never flying (except for swallows and, in more recent times, white doves carrying letters). Roosters are symbols of masculinity, or the coming of dawn, and hens represent fertility. Very many of these symbolic motifs appear in the folk embroidery and textiles of the Ukraine.

Once a design is settled on colour has to be seriously considered as it carries its own meaning ie.

Some color combinations had specific meanings, too:

For an opportunity to see all the colours, motifs and combinations you couldn’t do better than to visit the Psanka Museum in Kolomyya where you can see 6000 of the best examples of Psanka not to mention it’s eggcentric building design. 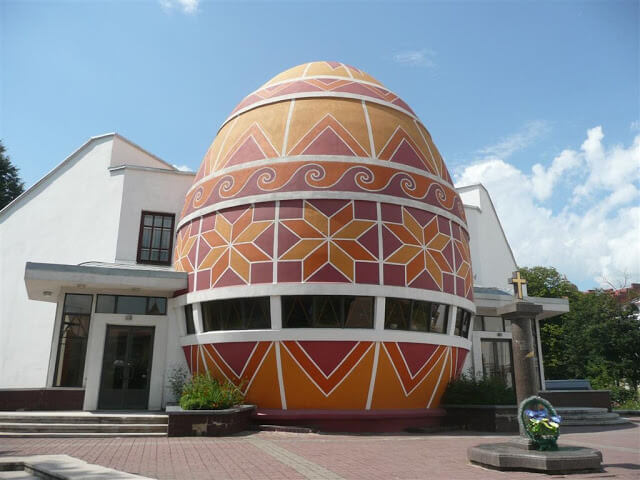 Pysanky means writing or to write and the eggs are decorated using a wax resist method. Beeswax was heated in a small bowl on the large family stove, and the styluses were dipped into it. The molten wax was applied to the white egg with a writing motion; any bit of shell covered with wax would be sealed, and remain white. Then the egg was dyed yellow, and more wax applied, and then orange, red, purple, black. (The dye sequence was always light to dark). Bits of shell covered with wax remained that color. After the final color, usually red, brown or black, the wax was removed by heating the egg in the stove and gently wiping off the melted wax, or by briefly dipping the egg into boiling water.

N.B. The eggs are never blown or boiled and must be fertile, ideally the first from a young hen. To stray from this could bring infertility and bad luck. 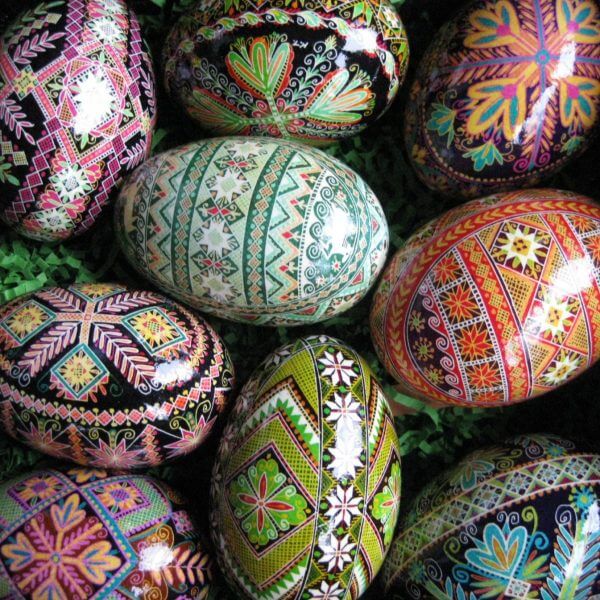 Pysanka continue to be made in modern times; while many traditional aspects have been preserved, new technologies are in evidence. Aniline dyes have largely replaced natural dyes. Traditional styluses are still made from brass and wood, but modern versions offer built-in, heated wax reservoirs and a choice of profiles for your dots and dashes….

You can easily book a place on our Egg Decorating event on Monday 26th March – just prior to Easter and in time to ward off any bad spirits. Places (10 available) are reserved through our website, here.