What do Printer’s do all Day? January Calendar Post

“I’m a compositor” Martin Clark explains, “but not many people will know what that is these days, so you’d better use the term ‘letterpress printer'”. Martin has worked at Tilley Printing for over fifty years, from the age of fifteen when he started as apprentice, to compositor, to printer and now, fifty years on, as proprietor.  Composing type as we speak, his unusually long fingernails working the tiny metal letters that make up words for print; address cards, business stationery, album covers, printed bags, poetry posters or artist’s books.

Tilley’s and Martin begin the day at 7.30am with ink at the presses, composing type is customarily done in the afternoon. For standard-sized jobs a Heidelberg press (circa 1970 and the size of a small washing machine) is used and a much earlier Wharfdale press for large works eg., land posters. The Wharfdale is the size of a very, very large dining table and runs from an electric motor using 5″ canvas drive belts that span the room. Considerable power is needed to move cast iron flat bed of the press which holds the chase or a heavy frame into which are locked wooden or metal letters. 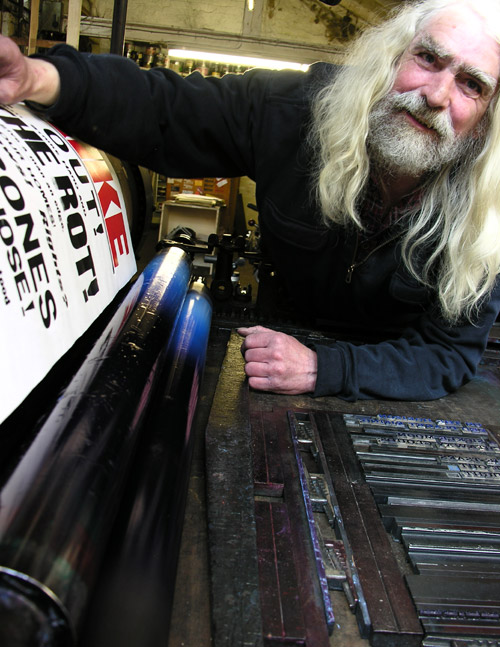 When the presses are running there is a kind of percussive rhythm to the place; the sound of belts, rollers and paper-feeds all combine so that the place seems to breath. Added to this are the smells of dust, ink and parrafin but most memorable is the sight of the place – banks of letters of all sizes, with styles so singular, original engravings, illustrations and ornaments – some polished with use, some languishing in a corner waiting for re-discovery. 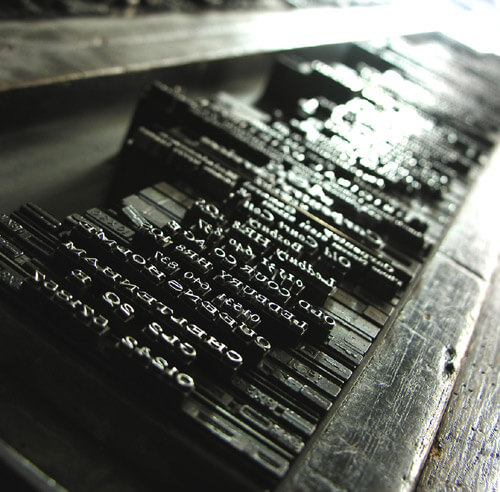 Tilley type ready for the press 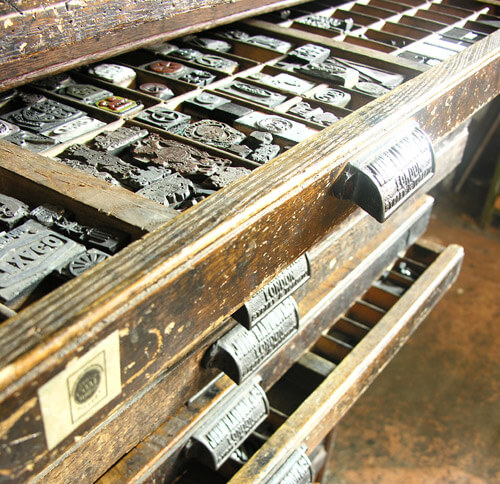 A tray of engravings.

The print works, to a degree, tells the story of the town – just see how many engravings are connected with, for example, hop growing or agricultural machinery, cider making, soft fruit or local societies and clubs. Tilley’s working day is punctuated by a fairly constant flow of visitors – some simply to see the works which have barely changed in more than fifty years, others come to collect or order printing. Most are known personally or come on recommendation via a regular customer. The day usually ends around 6pm, five days a week – so a normal week is over 50 hours. I’ve been visiting Tilley’s for over six years, but I knew, as most Ledbury folk know, of the print works because of “Tilley’s Almanac”. This local directory was produced by the press from 1878 to 1993, it was to be found, well thumbed in most  households and businesses – a local bible. When Martin began his apprenticeship in 1963 there were four letterpress printing works in the town. Now Tilley’s, the only one left, finds its rarity a great advantage. ” Letterpress is sought after  – as artwork with the obvious use of archaic type”, explains Martin, whose workload is peppered with ‘arty-stuff’ nowadays as well as formal stationery for business and domestic use. 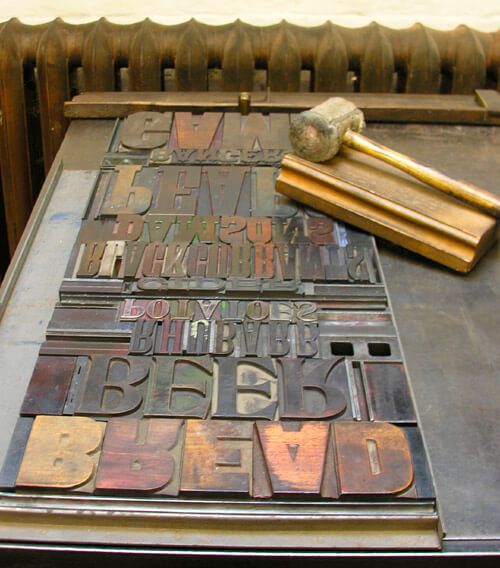 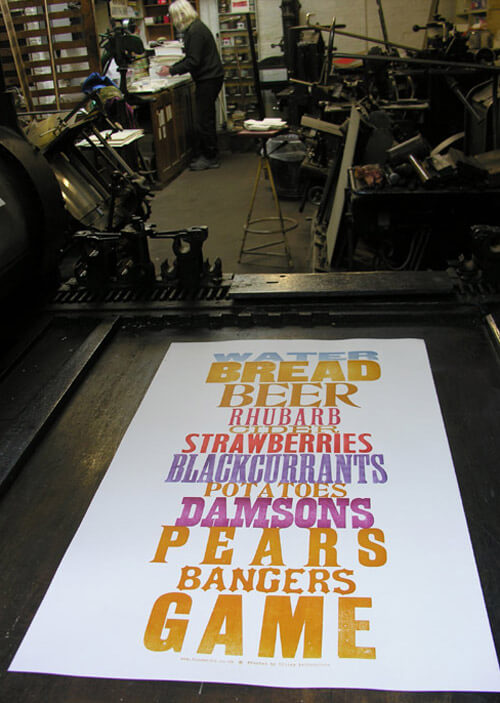 Martin’s decision to train as a printer wasn’t exactly his first choice, ” I’d spent my childhood doing odd jobs on the farms around Ledbury – fruit-picking, pruning; I suppose I was romantic for those misty autumn days and thought I’d go farming but my Mum stopped me going on the farm, she could see how things were going – its all changed”. Miss Tilley inherited the works from her family who ran a number of enterprises in Ledbury from the middle of the 19th century. She always had an apprentice – someone who would spend five years indentured to the firm before moving on as a journeyman. 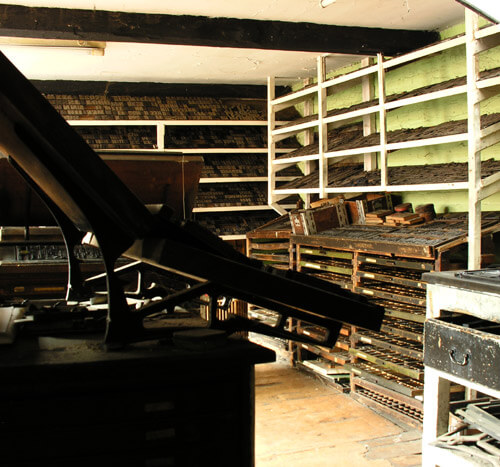 Compositor’s Room with draws and shelves of type.

Martin’s older brother, Phillip, worked for her and it was natural that Martin was familiar with the business. “When I was fourteen she said to me “You finish (school) early and come and work for me as apprentice compositor”, explains Martin who considered it a good offer; compositor was a step-up in terms of the fairly rigid hierachy of roles in the printing industry. Martin’s father signed the indenture and that was it. Cruelly, at the outset an apprentice was to “set” – that is place every letter, space, punctuation mark into a “form” be they psalms, or The Lord’s Prayer or any lengthy piece with tricky spellings, only to see it disassembled day after day until it was perfect. 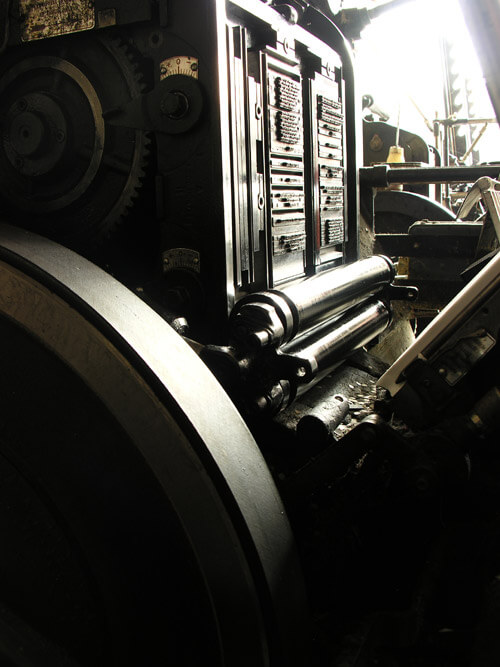 ” I’m no business man, I worked as a journeyman printer for six months or so after my apprenticeship was complete. I went to large newspaper printworks in Keswick, another in Stratford and a book publishing house in Oxford, but I liked the scale of Tilleys – I knew that although I was trained as a compositor, at Tilleys I’d have the chance to work in all the areas”, explains Martin, who could not have imagined quite how true this would become when, in 1983, he took over the works with just two printers and an apprentice and later worked on his own until the arrival of his current apprentice in 2012. When I asked Martin whether he plans for the future he smiled uncertainly, and looking over at his apprentice, Anneleise Appleby, said, “She’s the future, if you call that planning, in the sense that she will become a printer – all I can do is to do my best to train her.” Just as Martin, the returning journeyman printer, brought the innovation of machine-set type (linotype) to Tilleys, Anneleise adds her original artwork in the form of lino-cuts, to the repertoire of print processes that Tilley Printing can offer, setting it even further from apart commercial litho or digital printers. 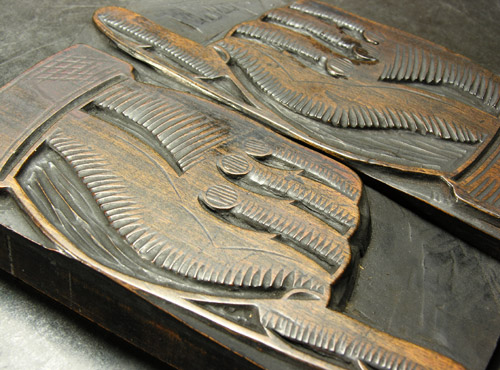 The invention of desktop printing undoubtedly had an enormous impact on traditional letterpress and hot-type printers, most either embraced the innovations or went to the wall. Tilley’s appears to have weathered the storm to take up a niche position. How did it survive? I believe partly due to the scale of the place, partly because staff had looked after the equipment, partly its position in a small market town with many loyal, local customers requiring shorter runs than commercial printers would entertain, but mainly because it is run by someone who has modest aspirations and who loves his work. 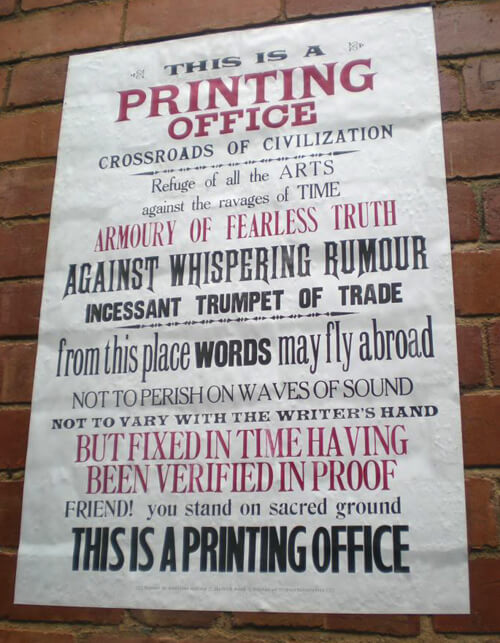