If you are making a visit to Ledbury, it is hard to miss its parish church. Its spire can be seen from many miles around but disappears when you find yourself on the town’s High Street. 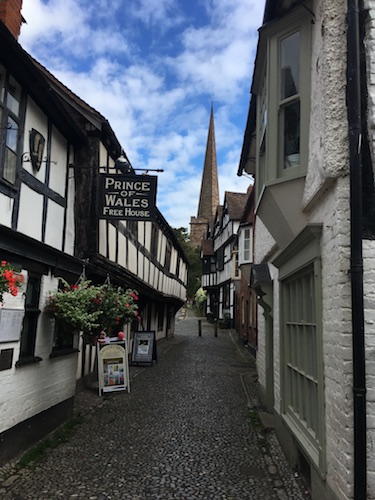 Follow the picturesque cobbled lane that leads away from the distinctive black and white timbered Market House and you will arrive at the gates of St Michael and All Angels set back within a walled churchyard filled with crumbling tombstones. 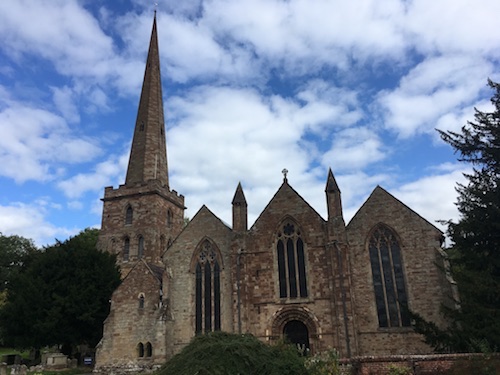 The building itself is perhaps larger than you would expect for a town of Ledbury’s size. Nikolas Pevsner called it the premier parish church of Herefordshire and, in his England’s Thousand Best Churches, Simon Jenkins gives it four stars, calling it ‘a church of all periods’ .

It is believed that the church might have been built on an ancient site of pagan worship, whilst the present building has been added to over the centuries; the beautifully carved Norman West door, dating from a time when the church was narrower and darker, faces you as you enter the churchyard. 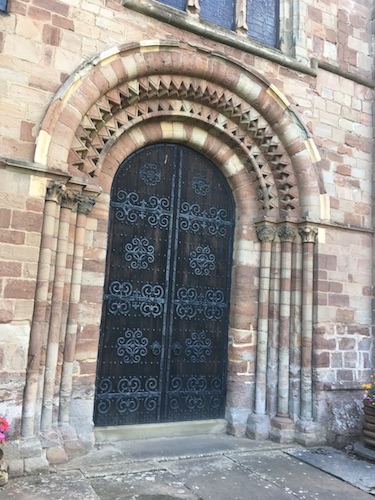 The square bell tower, with its nine foot thick lower walls, was built originally as a stronghold against the Welsh invaders – hence its separateness from the main church – with a steeple added five hundred years later. Within are housed eight bells, the earliest dating from 1690, whose chimes can be heard all over town all through the day and night. If you are lucky enough to get permission to climb the bell tower you will have an incredible bird’s eye view of Ledbury town. 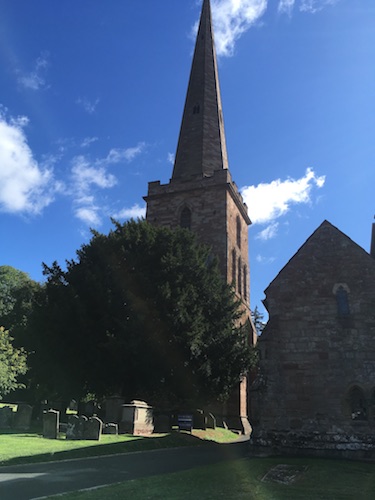 Once within the church, the pronounced sense of overlaying centuries is even more obvious. In the oldest part – the Chancel – there are round headed arches and ‘porthole’ windows of an earlier structure. Like a church within a church, these portholes now look out to the north and south aisles. On the north side is an unusual extension, the Chapter house, also called St Katherine’s chapel, built in the 14th century.

When you look upwards to the 15th century carved roof you will notice the main columns, built on the original Norman bases, lean very slightly outwards towards the two adjoining aisles. 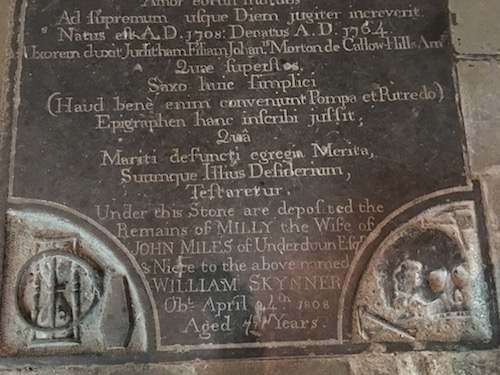 As you walk around the interior you tread over Ledbury’s history. There are over 150 floor memorials or ‘ledger stones’ commemorating nearly four hundred past residents of the town. Some are now indecipherable but many tell of prominent local citizens of the past.

All about the walls are effigies and monuments. There are misericords carved in the choir stalls, a beautiful seventeenth century font, unusual pillar carvings of mythical beasts, brass effigies and the many designs of the embroidered tapestry kneelers.

There are twenty four stained glass windows that span the centuries, including ten windows by the celebrated Victorian Charles Eamer Kempe. I was advised by one of the volunteer guides – on hand most days to share a wealth of historical information and enthusiasm – that the south aisle stained glass window would have been more appropriate as the main window behind the altar.

I was also told of a fascinating – but hard to spot –  detail of a small red window that can be seen when looking up from the Nave. History tells that it was inserted during the Reformation when the red sanctuary light of the Catholic faith was forbidden.

The oak pulpit was carved in 1833 by the church’s rector Reverend John Jackson. The story goes that he infamously had to resign in disgrace after his maidservant carried her baby up this aisle to where he was preaching to the congregation, demanding he acknowledge his bastard child.

My favourite memorial is the 17th century Skynner family tomb to the right of the Chancel . All the figures, except the baby, are wearing Tudor ruffs. The husband faces his wife in her splendid hat, their tiny deceased baby between them, whilst at the base of the memorial their ten children kneel at prayer. One of the daughters holds a skull to indicate that she too died before her parents. 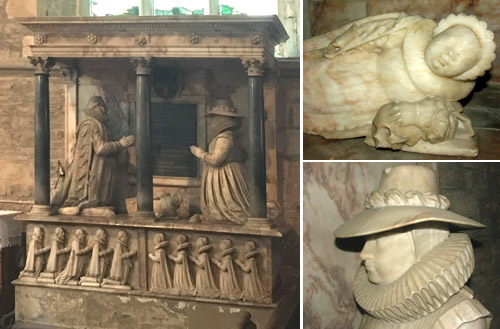 In June this year the church confirmed an extraordinary finding. It would seem that one of its two Last Supper paintings, recently restored by Artist and Conservator Ronald Moore, has been identified as an original large scale Renaissance Altar Piece, perhaps even influenced by Veronese.  “It’s probably mid-16th century from an Italian Renaissance painter who was aware of Leonardo’s Last Supper in Santa Maria delle Grazie in Milan….I think this is the lost Last Supper of Polidoro and friends “ Ledbury Reporter August 2018

The Last Supper  showing details (below) from the whole (above) which stretches over 13 ft across.

If you do come to Ledbury, take the time to visit here. I might have noted a selection of some of St Michael and All Angels’ beguiling aspects, but there is a great deal more to Ledbury’s Parish Church.