Tinsmiths Calendar Post – What do Hairdressers do all day? 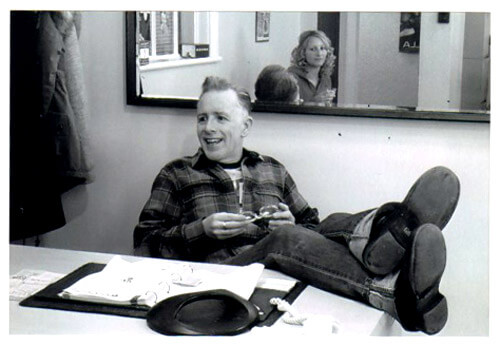 On being asked why he became a hairdresser, Mervyn Parnell is liable to give one of two answers, either: “I was good at art, I could draw and I knew I was creative. I could have gone to art college but it was full of ‘hippies’ not people like me, so I thought that hairdressing would allow me to be creative and earn a living”. The other answer is “I was a 5’2” lad with buck teeth, so I figured that going into an industry which had loads of girls and not too many heterosexual men working in it, that I would be bound to pull.”  I’m not sure which answer is true. In any case Mervyn started as a Saturday boy in a salon near his family home in Gloucester in his early teens, he was cutting hair at 15 and had is own client list at 16. “No one ever taught me, there was one chap John Phelps who ran another salon and had been a world champion, we just used to talk about cutting hair which sounds a bit sad but he’s the only person that I learned anything from”.

A girlfriend and job brought Mervyn to Ledbury at the beginning of the 80’s. “I remember getting off the bus with a Mohawk haircut wearing bondage trousers and I thought ‘What the heck am I doing here?’  Mervyn has continued to be one of Ledbury’s more stylish residents with a collection of more than 60 vintage Levi jeans, 25 Levi jackets from the 40’s & 50’s, Pendleton shirts and 1948 -1956 suits it can be said that Mervyn is more into clothes than most “It just smacks of laziness, dressing badly”. 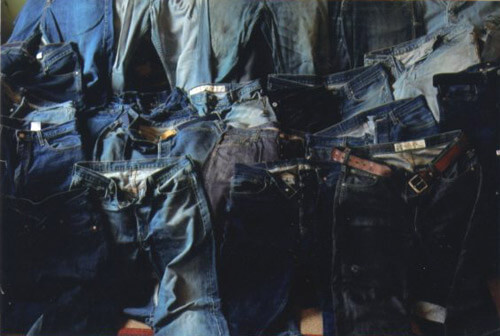 In 1986 Mervyn opened the Cutting Club, with a distinctly mid century feel and educational selection from Mervyn’s extensive record collection of northern soul, 50’s & 60’s R & B and roots rockabilly music playing, the salon has been busy since the day it opened.

“My working day starts at 7.30 in the morning and ends at 7.30 in the evening, I have 20+ clients a day and I can’t wait to get a pair of scissors in my hands”. “So you like what you do?” “Absolutely; I like to create and change, I like cutting hair and I really like the people that I work with, in 28 years I’ve never had a crossed word with any of my stylists”. 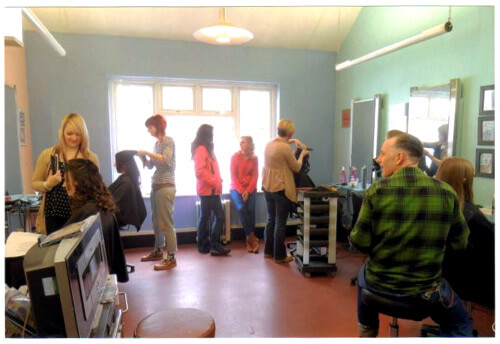 Like Martin (the Printer from January), Mervyn is another Ledbury Luddite, there is no computer in the salon or in Mervyn’s life and no mobile phone either, this seems to be an aesthetic choice as much as anything ‘I struggle with technology, I’m just not interested, I prefer things which are crafted with a hand and heart’. And fashion as a concept is difficult for him too ‘I like style not fashion, I like a good hair cut where you can see it’s a whole exercise in shape, not to be dressed’ 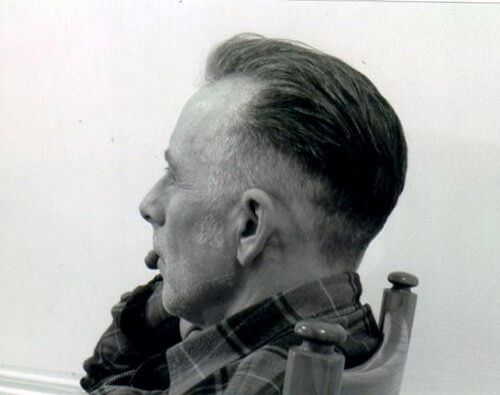 Mervyn and I go back along time; he first cut my hair when I was 14, it is a haircut which is etched on my memory because until that day my hair had been long, straggly and mainly scratched back into a ponytail and found under a riding hat but the sleek sharp bob that Mervyn gave me made me aware of a whole new world of possibilities!

The Cutting Club. Tel:01531 635866 and to get a flavour of the music Mervyn is cutting to follow this Spotify link to a few of his favorite tracks.