Tinsmiths’ Calendar Post: What do Upholsterers do all day?

Sam Prentice’s workshop is crammed with furniture. It’s always this way when I visit. Sam is self conscious about it, ‘You can’t photograph here, it’s too messy’ he protests. Over the years I’ve come to understand that any upholsterer that isn’t busy isn’t very good. Once people find a good upholsterer, commissions for small footstools quickly progress into a set of dining chairs, a sofa or two; as one job gets finished and delivered, another is picked up ‘I am never short of work but trying to make a plan or manage it, well that’s more difficult.’ 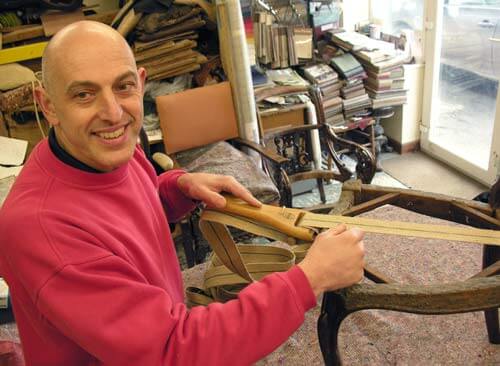 Sam set up Hartpury Upholstery in 2005 when he and his wife, who had family ties with the area, decided that Gloucestershire was a good place to bring up a family. ‘I couldn’t do this in London, the overheads would make it impossible. You do need a bit of space’ and getting started with his own workshop? ‘Around here it’s all word of mouth, you do a bad job and everyone knows about it – but that’s been really good for me, because it works the other way too’

Being a one man band Sam has to cover every aspect of his business; part of the week will be spent heaving furniture in and out of the van either when collecting furniture to be reupholstered or delivering finished pieces ‘My friends joke ‘how’s the stitching?’ but, when they’ve lent a hand delivering, they realize it’s a bit more physical than that’.

Every job is different; the age and condition of the piece will dictate what is done, the materials used and how the work is done. The day starts at 8.30am and finishes around 6.30pm ‘If I’ve nearly finished something I will carry on until it’s done if I can, family permitting. I like to start the day with something new.’ Of course there’s the inevitable paperwork; invoicing and ordering supplies to keep on top of, as well as being a sales person. ‘I’m a tradesman, not a salesman. It’s not me. Some of the people I’ve worked for were quite ruthless about it and I’ve wondered if I shouldn’t take some of that, but it’s just not my nature.’ Sam reflects. 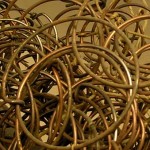 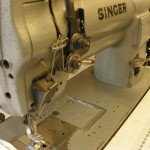 So why upholstery? ‘It’s in the blood, my Dad and Uncle were both upholsterers, I did my apprenticeship with them and then worked with them. Seven years in total; they worked for a chain of hotels in London doing restoration and new furniture’. It was 1982 when Sam began his apprenticeship as a 16 year old school leaver. ‘The country was in recession, it’s felt a little like that ever since’. Sam’s Dad had been in the trade all his life. ‘At weekends he would have projects going at home. One of my earliest memories is the sound of the treadle on his sewing machine going in our front room.’ Being trained in the era of piece work and very exacting standards Sam’s Dad & Uncle kept a close eye on the apprentices. ‘I am so glad I had that time with them, the stories they had, working with my Dad I had seven quality years with him’. 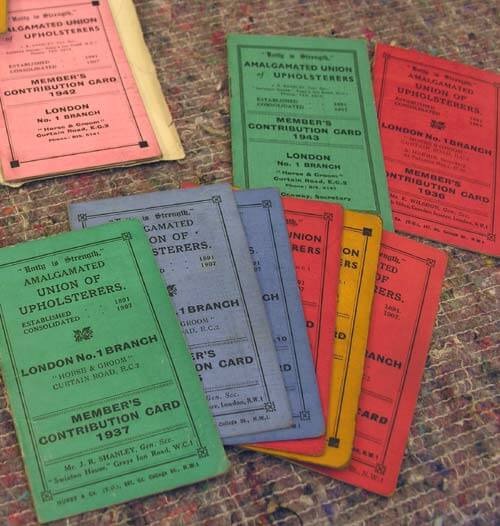 After the hotel chain Sam went to work for small independent shop in Islington that offered a re-upholstery service, with a wide variety of furniture coming through the door it gave him a chance to increase his knowledge and suited him in other ways. ‘I’m an Arsenal supporter, so I could get to all the midweek home matches.’ Five years later, ‘We were in recession proper and that business went under,’explains Sam, whose move to work with an interior design business and later for an antique dealer showed him another world with a high end clientele and where qualities like longevity were not so important.  ‘It was a real eye-opener: it was all about the look of it.’ 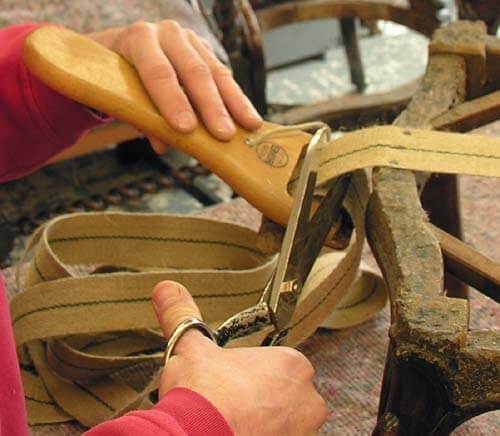 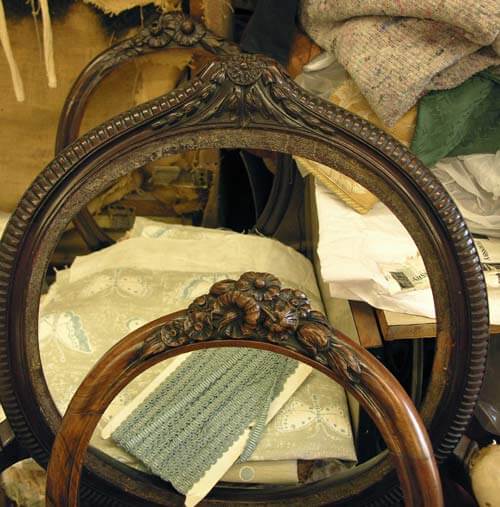 When I ask how things have changed in the trade over his working life it becomes clear that things have gone full circle. ‘Customers today say to me,‘I want this to see me out.’ Excellent workmanship and good quality cloths, with an emphasis on value and long life, are once again the order of the day. I asked Sam whether he still liked his work, whether he’d change direction, “I didn’t realise what I was missing until I set up my own workshop. It’s very rewarding to see my customer’s reactions to the finished pieces. I think if you don’t enjoy it, it reflects in your work. You’ve got to have job satisfaction”. 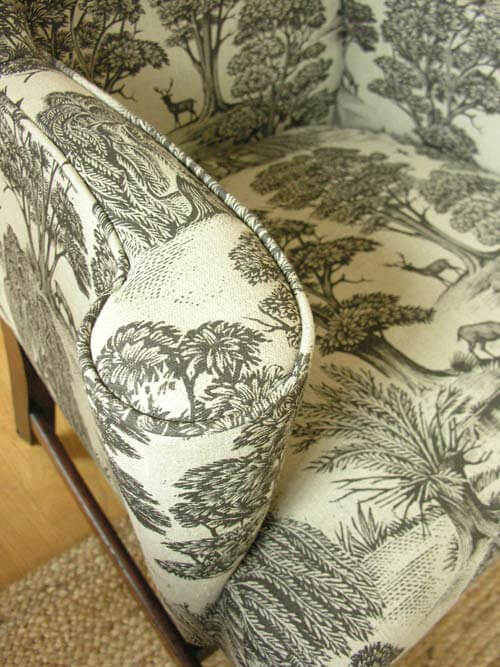 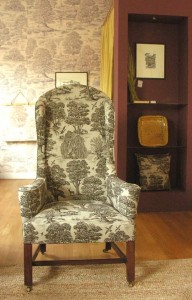